U.K. Security Agencies Want Internet Service Providers To Routinely Store ALL User Email And Web Activities For 1 Year (Does This Sound Like Freedom?) 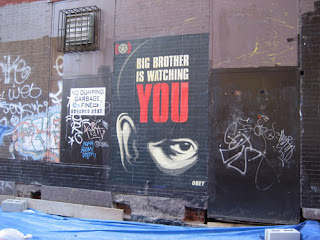 "A massive [U.K.] government database holding details of every phone call, e-mail and time spent on the internet by the public is being planned as part of the fight against crime and terrorism. Internet service providers (ISPs) and telecoms companies would hand over the records to the Home Office under plans put forward by officials"

"The information would be held for at least 12 months and the police and security services would be able to access it..."

"Industry sources gave warning that a single database would be at greater risk of attack and abuse.

Jonathan Bamford, the assistant Information Commissioner, said: “This would give us serious concerns and may well be a step too far. We are not aware of any justification for the State to hold every UK citizen’s phone and internet records. We have real doubts that such a measure can be justified, or is proportionate or desirable. We have warned before that we are sleepwalking into a surveillance society. Holding large collections of data is always risky - the more data that is collected and stored, the bigger the problem when the data is lost, traded or stolen.” "

The Times - ‘Big Brother’ database for phones and e-mails

This plan was previously put on hold because of implementation difficulties and resistance. The above article is from 2008. The plan has been brought back... [James]

The government's plans to store UK citizens' emails and internet history have been criticised by the Information Commissioner as going too far.

The Strategic Defence and Security Review, published last week, includes plans to force ISPs, and potentially all companies, to store email and internet data for at least one year." - 26 Oct 2010

Despite the coalition government promising to outlaw the retention of internet and email records stored without good reason, the recent Strategic Defence and Security Review said that the former Labour government’s project would be revived.

ISPs and mobile operators already record, and retain for six months, email header information and web access details such as log-on/off times, IP address and details of dial-up numbers. Under the new regulations, this data would be supplemented with web activity logs, currently held for four days, and the complete data set would then be stored for a year."

"President of the United States (and former General of the Army) Dwight D. Eisenhower used the term in his Farewell Address to the Nation on January 17, 1961:

'A vital element in keeping the peace is our military establishment. Our arms must be mighty, ready for instant action, so that no potential aggressor may be tempted to risk his own destruction...

This conjunction of an immense military establishment and a large arms industry is new in the American experience. The total influence — economic, political, even spiritual — is felt in every city, every statehouse, every office of the federal government. We recognize the imperative need for this development. Yet we must not fail to comprehend its grave implications. Our toil, resources and livelihood are all involved; so is the very structure of our society. In the councils of government, we must guard against the acquisition of unwarranted influence, whether sought or unsought, by the military-industrial complex. The potential for the disastrous rise of misplaced power exists and will persist. We must never let the weight of this combination endanger our liberties or democratic processes. We should take nothing for granted. Only an alert and knowledgeable citizenry can compel the proper meshing of the huge industrial and military machinery of defense with our peaceful methods and goals so that security and liberty may prosper together.' - Dwight D. Eisenhower

In the penultimate draft of the address, Eisenhower initially used the term military-industrial-congressional complex, and thus indicated the essential role that the United States Congress plays in the propagation of the military industry. But, it is said, that the president chose to strike the word congressional in order to placate members of the legislative branch of the federal government" - Wikipedia

It has been said that the "Military Industrial Complex" has been replaced by the "National Security Apparatus".

I will quote "Jonathan Bamford, the assistant Information Commissioner" again "We have warned before that we are sleepwalking into a surveillance society."

"It is easy to use George Orwell’s 1984 as a comparative reference to where society is at now, but the novel is surely as important as it ever has been.

The modern classic presaged a dystopian society where people were deprived of privacy and, as a ruling body, the Party watched every move citizens made through its Big Brother mechanism.

While Orwell was onto something, however, his prediction (if it indeed was one) of an omnipotent, omniscient, singular controlling body was not exactly spot on.

In today’s Western world the central powers – aka each nation’s government – are not the only ones watching over us, gathering our data and making use of it.

Instead, there are now an abundance of organisations mining personal information to ascertain what people are doing, and even to predict what they will do next.

Given the sheer proliferation of data available over the web and the huge range of sources, companies do not have a particularly arduous task in gathering our information these days.

And whilst in 1984 the Party was the dominant force of one state, Oceania, these companies are global and able to gather people’s data regardless of location.

So, a question: Are we now living in the updated version of the Orwellian Nightmare?"

IT Pro - The Orwellian Nightmare: Version 2.0