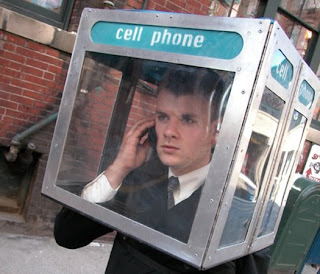 The latest estimates of telephone coverage by the National Center for Health Statistics found that a quarter of U.S. households have only a cell phone and cannot be reached by a landline telephone. Cell-only adults are demographically and politically different from those who live in landline households; as a result, election polls that rely only on landline samples may be biased. Although some survey organizations now include cell phones in their samples, many -- including virtually all of the automated polls -- do not include interviews with people on their cell phones. (For more on the impact of the growing cell-only population on survey research, see "Assessing the Cell Phone Challenge," May 20, 2010). 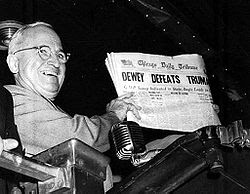 Good article. The way that cell phone only households can skew polling reminds me of how Dewey vs Truman turned out. The election was very close. A few thousand votes would have changed the outcome. The polling that was done was biased toward those with telephones. In 1948 only more wealthy people had telephones. Rich people in 1948, just like now, are more likely to vote Republican. In 1948 huge swaths of the United States didn't have telephones. They were poorer and more likely to vote Democrat. They weren't polled, or were polled poorly (polling in areas with few telephones was done by door-knocking in "representative communities" [talk about sample bias issues...])

Nowadays a huge number of young people don't have land lines. I am personally of the opinion that because cranky old white folks make up a larger amount of land lines, U.S. polling results are currently skewed (not enough to save the Democrats, but skewed none-the-less).

"Intentional Sample Bias
Intentional sample bias covers a variety of techniques that pollsters use when they select people for the sample. For an extreme example, some polls (like, I think, Zogby) try to get an equal number of people who self-identify as republicans and democrats. But in most states, the number of party members in the two major parties are not equal. They are, in fact, often pretty dramatically uneven. A less dramatic but still significant one is that many polls do their polling through phone calls, and only call land-lines. Many younger people no longer have land-lines; the exclusion of cell-phone numbers therefore excludes some portion of the population from the sample. These kinds of sample bias produce a significant mismatch between the population of real voters, and the population being sampled."